Designed by Paul Renner, Futura® is a sans serif font family. This typeface has twenty-two styles and was published by URW Type Foundry.

Futura font is THE prototype of a geometric or constructed linear sans serif and the font most commonly font of its kind used to date.

Futura font, very much influenced by the Bauhaus movement in Germany, was designed in 1927 by Paul Renner.

Although being around for almost 90 years, Futura seems eternally young and fresh which also explains its continuous popularity with designers and typographers. 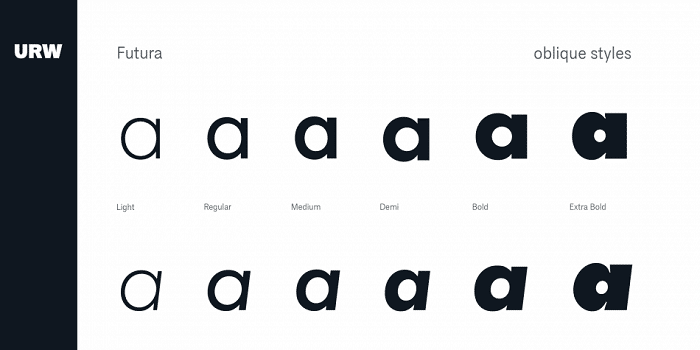 Futura’s iconic status was probably established when it walked on the moon with the Apollo 11 crew in 1969. It was used for the lettering of the plaque that was left up there.

The form is ancient, Greek capitals being inscribed by the Cretans twenty-five hundred years ago at the time of Pythagoras in the Gortyn Code, by the Imperial Romans, notably in the tomb of the Scipios, by classical revival architects in eighteenth-century London, which formed the basis for Caslon’s first sanserif typeface in 1817.

Some aspects of the Geometric sanserif survived in the flood of Gothics that followed, particularly in the work of Vincent Figgins.

In 1927, stimulated by the Bauhaus experiments in geometric form and the Ludwig & Mayer typeface Erbar, Paul Renner sketched a set of Bauhaus forms.

the professional letter design office at Bauer reinvented the sanserif based on strokes of even weight, perfect circles, and isosceles triangles and brought the Universal Alphabet and Erbar to their definitive typographic form.

Futura became the most popular sanserif of the middle years of the twentieth century.

Functional yet friendly, logical yet not overintellectual, German yet anti-Nazi… with hindsight the choice of Futura as Volkswagen’s ad font since the 1960s looks inevitable. 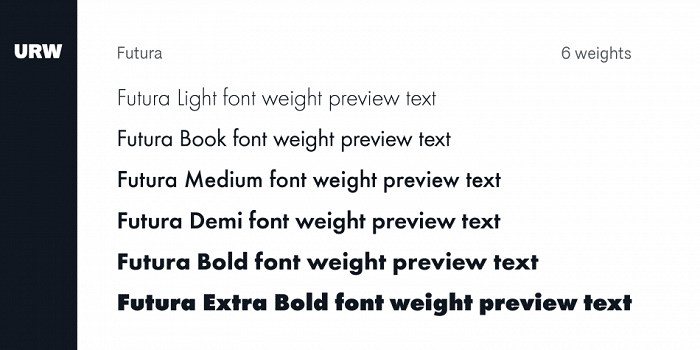 Contrary to popular thinking, the Futura® typeface was neither conceived at Germany’s Bauhaus nor decreed as the quintessence of the design school’s teaching.

Paul Renner, Futura’s designer, had no Bauhaus affiliation, although his original sketches embodied the ideologies of the Bauhaus movement.

His work was translated into fonts of metal type by The Bauer Type Foundry of Frankfurt, which made considerable changes to his Futura. The end result was a melding of Renner’s philosophy with proven typeface design precepts.

Futura Font is a demo font is for PERSONAL USE ONLY!.