Brandon Grotesque is influenced by the geometric style sans serif faces that were popular during the 1920s and 30s, the fonts are based on geometric forms that have been optically corrected for better legibility.

The small x-height and the restrained forms lend it a distinctive elegance. The Brandon Grotesque weights are great performers in display sizes. For longer texts and small sizes, we created the perfectly fitting Brandon Text Family.

Brandon Grotesque has a functional look with a warm touch. While the thin and the black weights are great performers in display sizes the light, regular and medium weights are well suited to longer texts. The small x-height and the restrained forms lend it a distinctive elegance.

Brandon Grotesque is equipped for complex, professional typography. The OpenType fonts have an extended character set to support Central and Eastern European as well as Western European languages.

With his Brandon Grotesque font, the type designer Hannes von Döhren has shown that he does not just have the knack of designing display fonts such as Snoogle™ or elaborate Antiques like Opal™.

Hannes von Döhren took the structures sans serif fonts of the ’20s and ’30s in the 20th century as his inspiration for the Brandon Grotesque. However, von Döhren reworked the structured forms with legibility in mind. 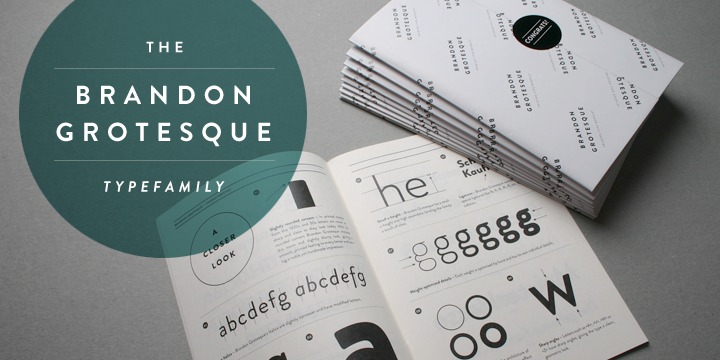 Brandon Grotesque is available in six-stroke widths from Thin to Black; the forms of the Thin font style are reduced almost to a hairline. There is a matching Italic font style for all stroke widths, in which the slanted letters are justified slightly more narrowly.

Thanks to its unobtrusive, neutral, but nonetheless distinctive character, the Brandon Grotesque can be used in a variety of areas of application; while von Döhren thinks that the very Thin and the thick Black are more suitable for display purposes, the other stroke widths also cut a very fine figure in the area of text. The skilled combination of structured sans serif with elements of modern typography makes Brandon Grotesque highly individual, and ideal to enhance your layouts.

Brandon Grotesque Font is a demo font is for PERSONAL USE ONLY!.