Hello folks, a few months ago Xiaomi launches Redmi Note 7 in China which is an affordable smartphone from Xiaomi with very interesting 48MP Camera and there is some information coming up on the global launch of Redmi Note 7 and according to company’s head Manu Kumar Jain the Phone might launch in the First week of March 2019 other side Oppo launched a most interesting mid-range smartphone Oppo K1 which is available for sale on Flipkart with that phone feature built-in-display fingerprint sensor and 25MP front camera. Both Smartphones seem to be feature very high specs and similar processor and today in this article we will compare both devices design specifications and main features in details. 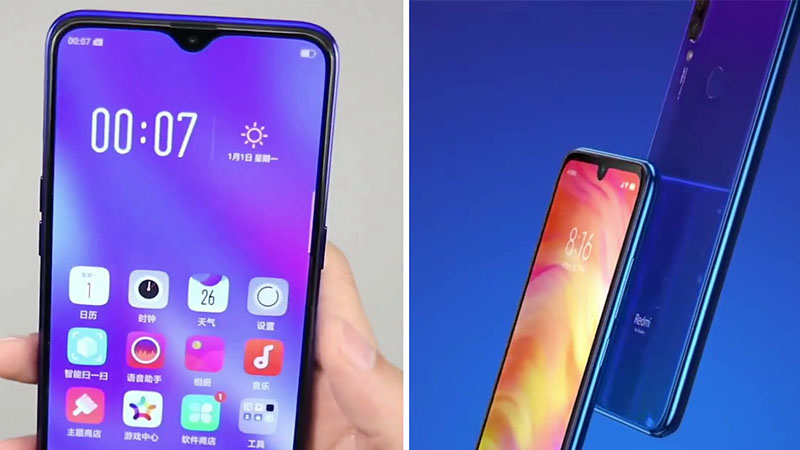 Oppo K1 and Redmi Note 7 both devices feature water drop display notch perhaps this is the only similar design you can see on both devices also Oppo K1 has a bigger display and much thinner body as compare to Redmi Note 7 other hand Note 7 feature glass body design with gradient finish which gives fabulous look to the handset also you can see dual cameras on both handsets but differently located, Note 7 has vertical camera while K1 feature horizontal camera, with that Redmi Note 7 feature regular fingerprint sensor, while Oppo K1 has built In-Display fingerprint sensor and the fingerprint, works well also the company claims that the phone unlocks in 0.44 seconds and that’s really nice feature from Oppo. 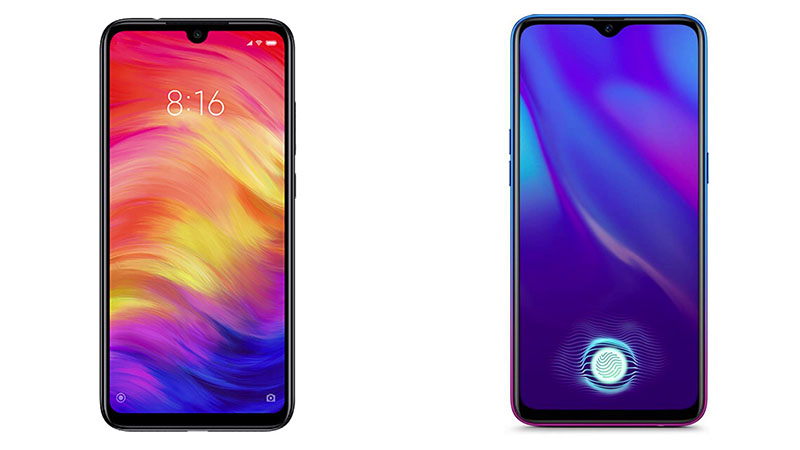 Another important difference on both devices is the USB connector, Redmi Note 7 comes with the latest USB Type-C port while Oppo K1 has an old micro USB port and almost every budget smartphone feature this so here Note 7 got plus point because of Type-C Connector. So here both devices seem to be very nice gradient design and that’s why its very difficult to choose which design is better because Note 7 has glass back panel and USB Type-C port while K1 comes with bigger display and In-Display fingerprint sensor however it has only a drawback feature which is the micro USB port other than both handsets are best in their class. 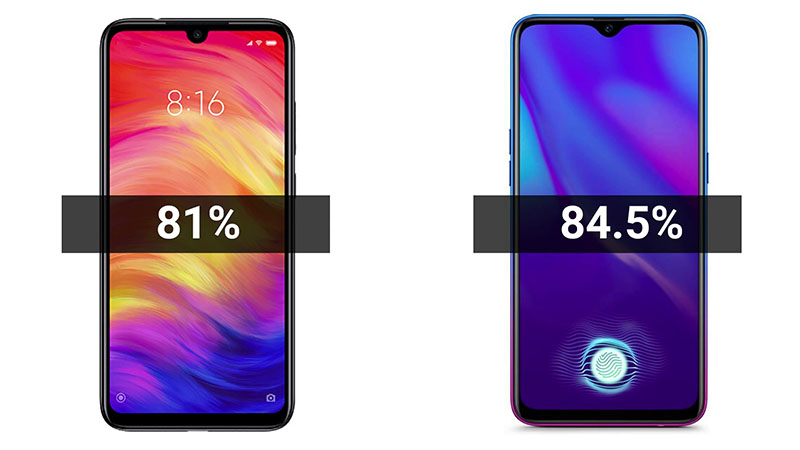 One of the main features of the Oppo phone is its display Oppo K1 has 6.4-inches Full HD+ resolution display with higher 84.5% of the screen to body ratio, while other hands Redmi Note 7 comes with 6.3-inches HD+ Display with 81% screen to body ratio thus you can see K1 features thinner bezels as compare to Note 7 however, the main advantage of Oppo K1 is the AMOLED panel which gives better and higher display quality then IPS LCD which is featured on Note 7 and both devices come with Corning Gorilla Glass 5 for the protection. 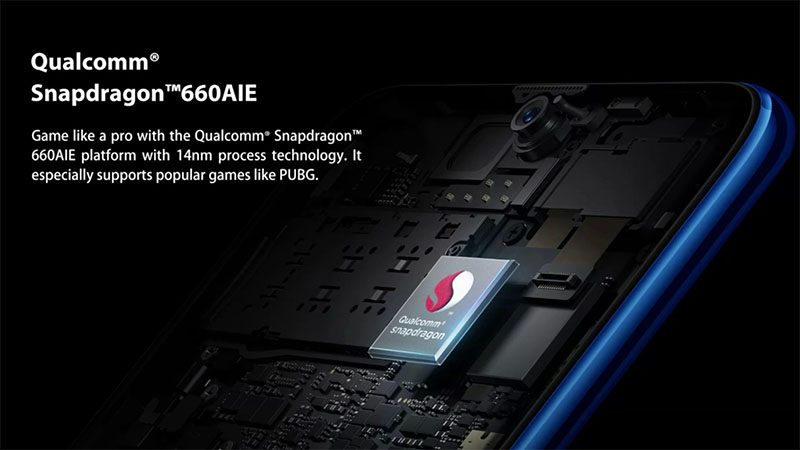 Next feature is one of the biggest reason why we have decided to compare both devices because Oppo K1 and Redmi Note 7 both handsets run on same Qualcomm Snapdragon 660 Processor which gives a similar performance when compared. 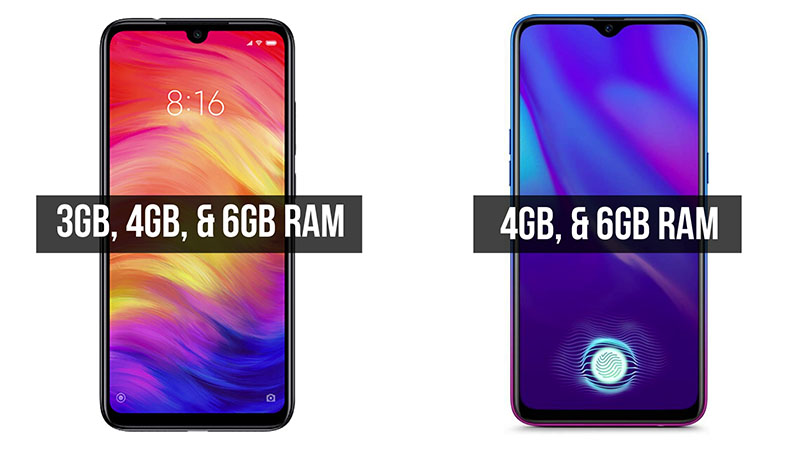 Redmi Note 7 is available in three different ram and storage variant of 3GB, 4GB, & 6GB with 32GB & 64GB Internal storage while Oppo K1 has 4GB & 6GB RAM with 64GB of storage variant also both devices support microSD card through which you can expand the storage. Oppo K1 runs on one-year-old Android operating system Android 8.1 Oreo which is based on company’s own color OS 5.2 skin on top while other hands Redmi Note 7 runs on latest Android 9.0 Pie which is based on MIUI 10 skin by the way which OS is better let us know in the comment section below. Both the smartphones have the same chipset and similar performance so here we cant choose the best one.

Redmi Note 7 is so popular because of a 48MP camera which makes a very large hype in the smartphone market but actually, this is a 12MP sensor from Samsung which gives 48MP picture quality by using pixel binning technology but we can’t complain of this because its a budget range smartphone and its not possible to provide original 48MP sensor under 12K budget, with that said Note 7 has 5megapixel secondary sensor to hold bokeh effects while Oppo k1 comes with 16MP primary camera with an aperture of f/1.2 and 2 megapixel secondary sensor on the selfie department Redmi Note 7 comes with 13MP front camera while Oppo K1 comes with higher 25MP selfie camera and both devices offer amazing photos, however Oppo K1 provides much better selfie because of 25MP front camera, so I think Oppo K1 has a better camera when compared to Redmi Note 7 camera.

Redmi Note 7 is so popular because of the high-end specification at a very cheap price the phone has a basic model of 3GB RAM and 32GB ROM which is price just Rs.11,999 while Oppo K1 starting price is Rs.16,999 for the base variant of 4GB RAM and 64GB Storage. However, guys both the smartphones are best in class and feature almost similar design, specs and performance and each of them has their own advantage, Oppo K1 comes with AMOLED display, in-display fingerprint scanner, and 25MP selfie camera while Redmi Note 7 comes with gradient glass panel USB Type-C port and bigger battery with quick charging support. What do you think which is the best smartphone and which has got best specs, share your opinion in the comment section below, So guys hope you like the comparison of Redmi Note 7 vs Oppo K1 see you in the next article till then bye bye!